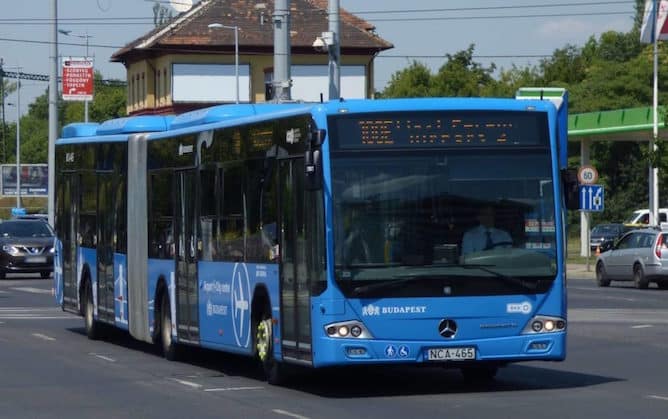 Good Tip: a direct bus line, called 100E, makes a daily connection between the airport of Budapest and the city center of the Hungarian capital.

This means of transport – Budapest airport bus – also offers the lowest price for travel to the city!

Travel time from the city centre to Liszt Ferenc International Airport on the 100E line is approximately 30-40 minutes.

To get to the airport, buses start at Deák Ferenc tér and stop only at Kálvin tér (exception: to facilitate transfer from night services, the first two 100E airport shuttles also stop at Astoria in the morning at 3:32 and 4:02), while the transfer points are at Kálvin tér and Astoria for buses going the other way to Deák Ferenc tér.

The stop of bus 100E called Kalvin tér is located on Üllői ut street, about 100 metres after the intersection of Kalvin Tér square, after and in front of the Aldi supermarket (location on map on this link).

The bus stop of the 100E bus called Deak Ferenc Tér is located on Károly Krt boulevard at the edge of a small green area, map on this link.

Departure times to the airport from the Deák Ferenc Tér station:

Important! Public transport (including bus 100E) is free for European Union citizens over the age of 65. The presentation of an identity document may be requested during a possible check.

Where to buy your ticket ?

You can purchase the specific ticket for Bus 100E at BKK (Budapest Public Transport) ticket offices at Budapest Airport in terminals A and B. You can also buy it at the vending machine in the bus station. It is located on the sidewalk between terminals 2A and 2B at the arrivals level. However, we have often noticed a long line on this dispenser and therefore recommend the BBK ticketing machines mentioned above.
You will also find additional information in our article, Airport transfer Budapest – city center.

In the city center, you can buy tickets at the counters or distributors of the metro and bus stations mentioned below.

BudapestGO is the name of the Budapest Public Transport (‘BKK FUTÁR’) application. In addition to journey planning, it now offers several new features: you can buy your ticket or season ticket in the app and you can be informed immediately about current traffic changes. The BudapestGO app can be downloaded free of charge, but some of its features are only available if you register (e.g. buy a mobile public transport ticket, set your preferred routes or stops).
It is available on Android or iOS smartphones (available for Android 8, iOS 13.0 or later). More information on how to use the BudapestGO app at this link.

To reach the city center of Budapest, bus 100E leaves the airport and stops at three stations in the center of the city:

From the city center-Budapest to airport direction:

Bus 100E departs Deák tér station every morning at 03:30. The last Bus 100E leaves this station at 00.00. The bus stops at the Kálvin tér station only, except for the first two morning buses that stop at the Astoria station.

Be careful: the success of the 100E bus, especially during the holidays, means you can expect a long line. Plus, the bus is often crowded and a good half of the passengers might make the whole trip standing up or might wait for the next bus.

Information on Budapest airport buses is available on the Budapest BKK public transport website on this link.

You can also use the Budapest public transport route planning tool available on this link. It will ask you where you want to go and suggest different options by metro, bus and tram.